Our original plan was to drive through Yellowstone and exit via the south entrance to reach our next destination, but there was a fire that flared up near the north end of Teton National Park which closed the road that connects the two parks. Instead we headed south outside the western edge of Yellowstone. The one advantage to taking this route was it allowed us to visit Mesa Falls which we would have missed had we gone the other way.


Overall we didn't have to deal with much rain on the trip, but it was drizzling a bit when we hiked to the falls. It gave Betty a chance to use the rain gear she brought for the trip.


After viewing the falls, we took some time in the Mesa Falls Visitor Center. In the back there is a room with pelts from lots of different mammals.  It was nice to compare mink, beaver, river otter, ermine, etc.

After four days of driving around the park, we took a day off to explore the town of West Yellowstone. Our timing was good since we could see a lot of smoke from the Maples fire in park. We spent most of our time at the Grizzly & Wolf Discovery Center. All the animals here are ones that could not be returned to the wild for one reason or another.

The bears are given a controlled diet, but then the staff hide food in an open area where bears are released for public viewing. Depending on the bear, they are allowed into the viewing area individually or in groups of two or three.

The wolves are kept in packs. Like the bears, they have a strictly controlled diet. The staff have a schedule for hiding food and scents in the viewing area as a treat for the wolves.


The center also has a small collection of birds.


We attended a bird show. We learned why each bird could not be released into the wild in addition to the biology and behavior of the species.

Here is a collection of photos that didn't fit into any of the previous categories but were too pretty not to include.


As we were walking along some of the boardwalks meandering among the hot springs, it was often very windy. Not too surprising given the large number of people that pass through each day, several people lose their hats to the wind. The last thing you want to do is step off the boardwalk to retrieve your hat. I saw abandoned hats at least four separate times laying on the unstable ground. I assumed that one of the park staff deals with retrieving the hats. Otherwise, the place would soon be littered with them. My suspicions were confirmed.

Other historic buildings in Yellowstone

I enjoy looking at the architecture of older buildings, and Yellowstone has many old buildings to see besides the Old Faithful Inn. Here are a few others we toured.

When we visited the Lake Lodge, we were enticed by the dinner menu which looked both interesting and reasonably priced. However, this was on the far side of the Loop Road, and I didn't want to be driving back to our cabin in the dark. Not only are the roads narrow and winding, you are more likely to run into animals trying to cross the road if you are driving at night. 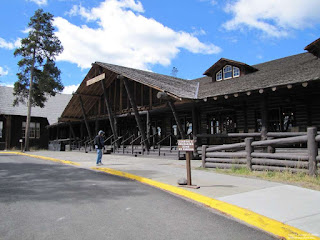 While we didn't stay at Old Faithful Inn, we did spend some time there.


The lobby is quite impressive. Construction used lodgepole pines, and the height of the building was designed to be the same height as the lodgepole pine. The lodgepole pine dominates the forests of Yellowstone comprising 80% of the trees found in the park. It consistently grows tall and straight, so it was a bit of a challenge to find curved lodgepole logs that could be used for the angled supports and railings you can see in the photo of the lobby below.


The Crow's Nest is 76.5 feet above the lobby floor. In the early days of the Inn, an orchestra would play from there while the guests would dance on the lobby floor. For safety reasons, the public is no longer allowed up there. We did overhear one guest say he had arranged for his kids to help lower the flags on the roof at sunset. Access to the roof is through the Crow's Nest.


Betty and I enjoyed a nice buffet lunch in the Inn's dining room.


We also took a tour of Old Faithful Inn which is worth doing if you are visiting the park.


Many of the original rooms have changed little since the Inn originally opened. They no longer have chamber pots, but the bathroom is down the hall.

The number of thermal pools in Yellowstone is huge. I have dozens, if not hundreds of pictures of them, but I wasn't very good about documenting the names of those I photographed. I am including some that I can name.

I really wanted to get a nice photo of the Grand Prismatic Spring. The parking lot for this spring was always full, so it took us several days before we managed to get to it. Parking wasn't the only problem. It turns out the trail to the overlook was closed, so you could only see it from ground level. It was also steaming heavily when we were there, so below is the best picture I could get.

If you look closely, you do see people at the observation point on the hillside above Grand Prismatic Spring. They were there illegally according to the ranger.

I only got photographs of two geysers of significant height going off at Yellowstone. One, of course, was Old Faithful. Betty and I joined the throngs of tourists patiently waiting for it to erupt. While we waited we ate sandwiches we had packed which worked out perfectly.

The park service predicts when Old Faithful will erupt with a plus or minus 10 minute window which is why it is a popular geyser to watch. While we were in the visitor's center before going to see Old Faithful, one of the rangers was going around letting people know that the beehive geyser was getting ready to erupt. This geyser erupts irregularly with intervals ranging from 22-36 hours to over two weeks, but the rangers can tell when it is close to erupting by how it is behaving. This one actually blows higher than Old Faithful, so we were fortunate to be there for the event.

I did almost catch a third geyser erupting, but it was going off while I was at Firehole Spring, so I only saw the tail end of the event and from a distance.


There was one geyser called Grand Geyser that sounded like it would be spectacular to see. It shoots much higher than Old Faithful, and the blast lasts 8 to 10 minutes, but unlike the plus or minus 10 minute window of Old Faithful, this one has a window of plus or minus 75 minutes. One has to have a lot of time and patience to wait that long.

I was in New Zealand in 2014, and it has some geothermal areas similar to those in Yellowstone. The one geyser I saw there may not have shot water as high as the ones in Yellowstone, but the eruption seemed to go on for tens of minutes and with very little time between eruptions.
Posted by Joe Wible at 9:00 PM No comments: